Due to exhaustion of IPv4 addresses, it's becoming a common practice to configure routers, servers, standalone computers, IoT devices and many other appliances using IPv6 address pool. IP version 6 [RFC8200] defines the exact same features and functions as IPv4, but the way IP version 6 is implemented differs from IP version 4. While both IPv4 and IPv6 address pools are finite, IPv6 has an extremely large amount of available total addresses compared to IPv4. In theory, the total IPv4 address pool contains 232=4,294,967,296. Some of these addresses are already reserved for internal or special use-cases.

In comparison, IPv6 has a pool of 2128=340,282,366,920,938,463,463,374,607,431,768,211,456 (more than 340 undecillion) available addresses. This amount of available addresses means that any device can have at least a single public IP address. This is especially relevant to the growing IoT industry as some of the devices require their own individual IP addresses to become reachable directly via the internet. However, while this IP address pool massive in theory, much like the IPv4, the IPv6 addressing has some notable rules and nuances that must be accounted for before implementing the newer IP standard.

Before diving into the details of how each IPv6 address space is classified and what it's used for, the inspection of IPv6 header from theoretical standpoint would assist in comparing and understanding the difference between IPv4 and IPv6.

Note: due to differences in headers, the IPv4 and IPv6 protocols cannot directly interoperate without utilizing supplementary methods such as dual-stack capable equipment, tunneling, 6to4, NAT64, Teredo, 6rd, ISATAP or other supported mechanisms. 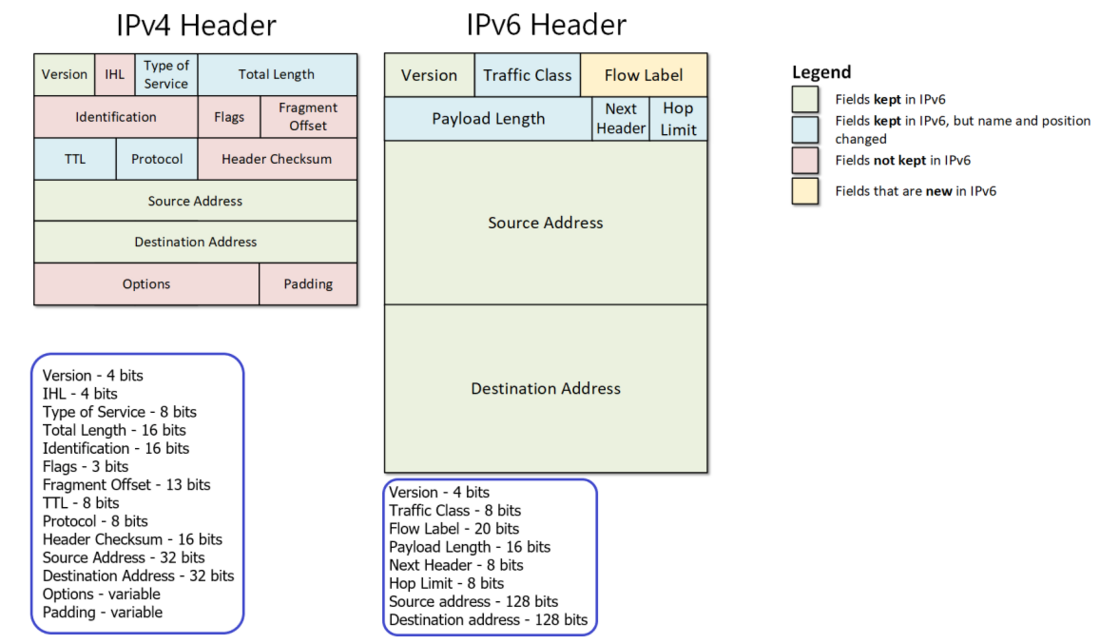 Comparison between IPv4 and IPv6 headers

The biggest differences between the IPv4 and IPv6 headers are the byte size and simplified designed of the header overall. IPv4 header varies in byte size - it begins from 20 bytes (5 x 32 = 160 bits) and can go up all the way to 60 bytes (15 x 32 = 480 bits). Due to variation in size, networking devices may require additional processing power for the when receiving and sending packets.

On the other hand, the size of main IPv6 header is constant - it will always remain at 40 bytes. There is an extension header for IPv6, which is similar to the "Options" field in the IPv4 header. However, in IPv6 case, the extension header is implemented past the fixed header. Most extension headers will be processed only by the destination node which results in optimization and efficiency of overall packet processing due to devices in the middle of the packet path not having to process extra information. The only type of extension header that must be processed by every single network device in the path is the "Hop-by-Hop" options header, which must always be the first one after the main IPv6 header.

There are many other differences between the IPv4 and IPv6 headers which won't be discussed or mentioned here. To read more about the design of IPv6 header and how it works, please refer to the IPv6 protocol RFC [RFC8200].

For example, the following is a random public IPv6 address with a /64 mask in full form (expanded):

In this example, first four hextets of this IP address will remain consistent at all times due to /64 mask - that means the beginning of IP address 2001:0db8:3c4d:0015 won't change. Reading a full IPv6 address, however, will take a very long time. To shorten it, we can use the second rule to eliminate unnecessary 0s. The following would be a shortened version of the given IPv6 address:

In order to reduce the size of this IPv6 address further, we can apply first rule eliminate the longest part between any consecutive hextets with a value of "0":

At this point the biggest work has already been done and all that's left to be done is cleaning up all the leading in specific hextets. In this example, reading from left to right, hextet #2, #4 and #8 can be shortened further by removing the leading 0s.

At this point the abbreviation part is done and we have a fully compressed IPv6 address. Please note that hextet #1, "2001" cannot be abbreviated due to not having a leading 0 at the beginning of hextet.

Important note: removing 0s in the middle or at the end of an IPv6 hextet is not permitted according to standard and it will result in either different or completely invalid IPv6 address!

To expand the IPv6 back to full format use the exact same logic but reversed. First, fill in the partially full hextets without leading 0s. Then, find the double colon "::" and count the hextets that are currently visible. Once done, fill in the 0s until all eight hextets in total are back in the IPv6 address.

Needless to say, while it may be easy to do, it's still manual work. Understanding IPv6 addressing, abbreviating and formatting is useful, there are tools to both validate and expand or abbreviate any given IPv6 address automatically. The following online resources are recommended to use when working with IPv6 addressing:

This section will briefly cover types of preassigned IPv6 addresses. Similarly to IPv4, some of IPv6 address pool is reserved for specific services and use-cases. The table below will be useful when working with IPv6 addresses and assigning or simply trying to understand how each IPv6 address has been allocated or used in comparison to IPv4. The original source of this table can be found and downloaded here.