A NATO Stock Number, or National Stock Number (NSN) as it is known in the US, is a 13-digit numeric code, identifying all the 'standardized material items of supply' as they have been recognized by all NATO countries including United States Department of Defense. Pursuant to the NATO Standardization Agreements, the NSN has come to be used in all treaty countries.

The NATO Stock Number consists of the NATO Supply Class (NSC or FSC) and the National Item Identification Number (NIIN). However the NIIN alone uniquely identifies the item, the FSC merely adds context by indicating the general classification of the item. The format of an NSN might be described as follows:

Each element, a through m, was originally intended to be a single decimal digit. As inventories grew in complexity, element g became alphanumeric, beginning with capital A for certain newly added items. By 2000, uppercase C was in use.

The initial subgroup, abcd, is the Federal Supply Classification Group (FSCG) [2] or National Supply Classification Group (NSCG). In theory, similar items would always have closely related numbers in this section of the NSN, no matter how the section is referred to. As the number of items has steadily increased and the system has become more complicated, it has not always been possible to keep similarity in numbers when the items are similar.

The nine digits, ef-ghi-jklm, comprise the NIIN (National Item Identification Number). This format improves readability but is optional as NIINs are often listed without hyphens.

The first two digits of the NIIN (the ef pair) is used to record which country was the first to codify the item—which one first recognized it as an important item of supply. This is generally the country of origin, meaning the country of final manufacture. The formal name of the field is CC for Country Code or NCB, because NCB also stands for National Codification Bureau. The NCB is the organisation, typically a government agency, in charge of maintaining the NCS database within a given country. The other 7 characters are a non significant identification number (actually code, as some of these characters may be alphanumeric, although in general NIINs are strictly numeric). 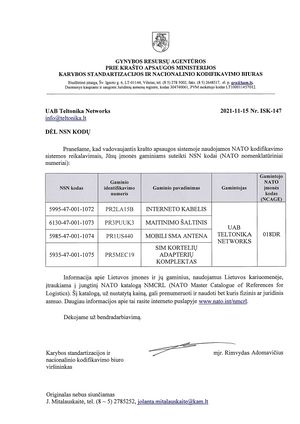