The information in this page is updated in accordance with firmware version RUT2XX_R_00.01.14.6.

RutOS uses a standard Linux iptables package as its firewall, which uses routing chains and policies to facilitate control over inbound and outbound traffic. This chapter is an overview of the Firewall section.

The General Settings tab is used to configure the main policies of the device's firewall. The figure below is an example of the General Settings section and the table below provides information on the fields contained in that section:

*When a packet goes through a firewall chain it is matched against all the rules of that specific chain. If no rule matches said packet, an according Action (Drop, Reject or Accept) is performed

Accept – packet gets to continue down to the next chain

Drop – packet is stopped and deleted

Reject – packet is stopped, deleted and, differently from Drop, an ICMP packet containing a message of rejection is sent to the source of the dropped packet

By enabling DMZ for a specific internal host (e.g., your computer), you will expose that host and its services to the router’s WAN network (i.e. – the Internet).

A zone section groups one or more interfaces and serves as a source or destination for forwardings, rules and redirects. The Zone Forwarding section allows you to configure these forwardings. 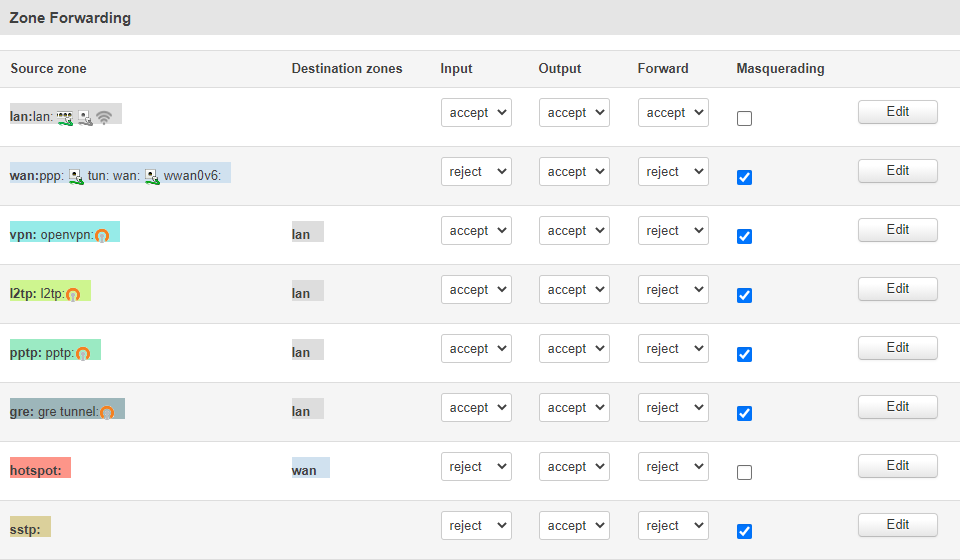 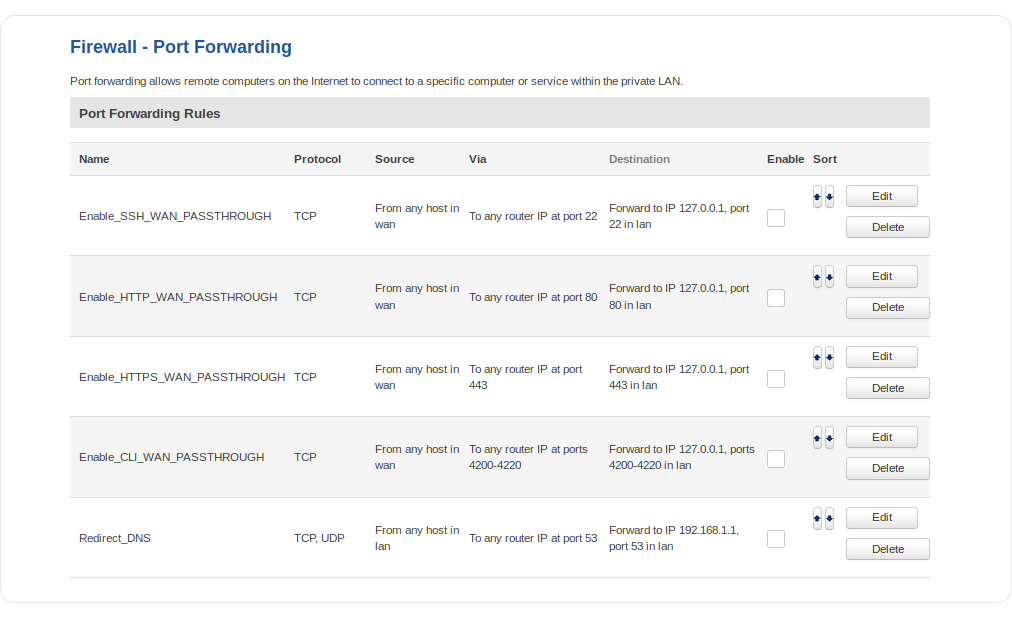 If none of the default rules suit your purposes, you can create custom rules using the New Port Forward Rule tab.

Once you have submitted the required information, click the Add button located in the New Port Forward Rule tab.

To configure a Port Forward rule, click the Edit button located next to it. Below is a continuation of the previous New Port Forward Rule example, where we look at the configuration of the newly created rule. 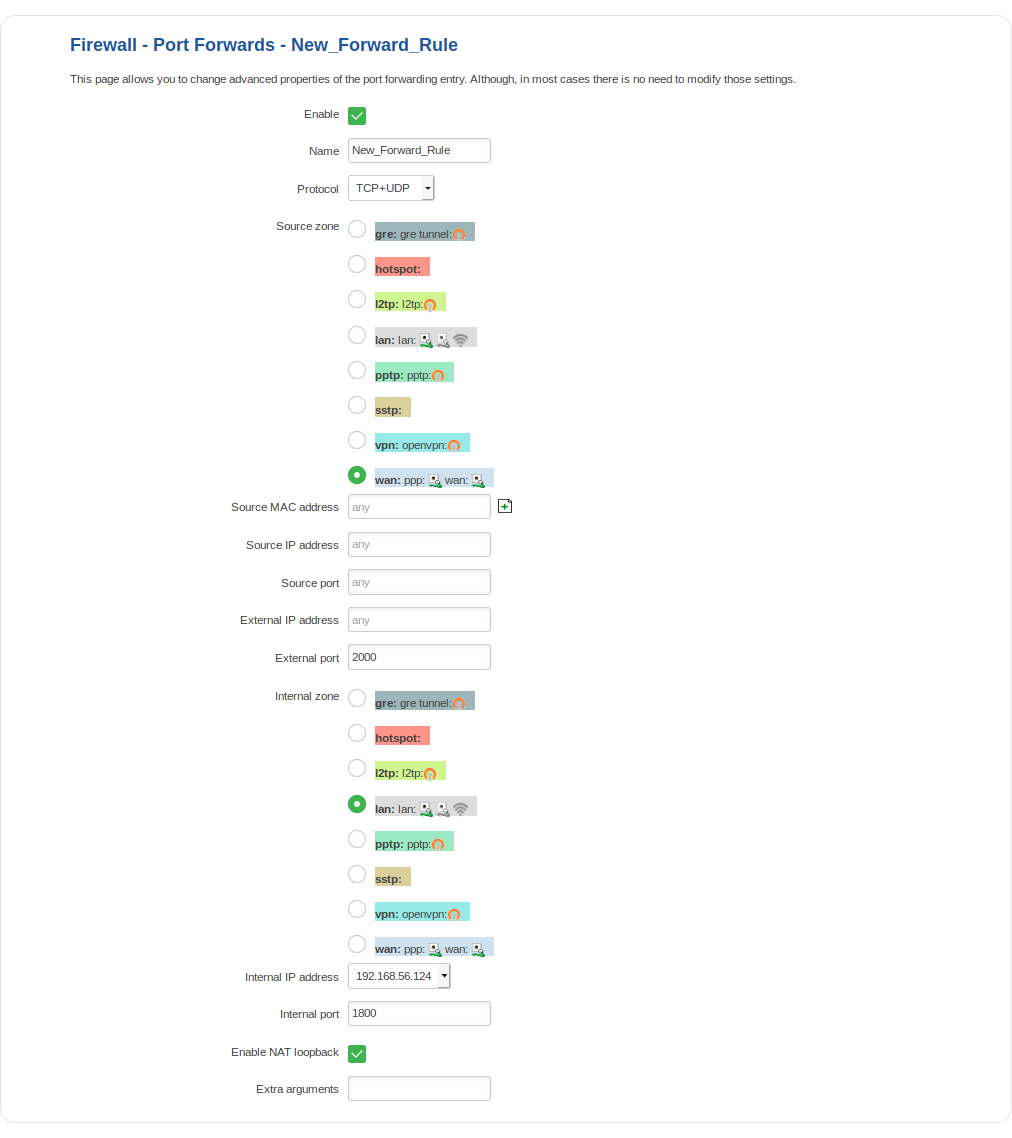 The Traffic Rules page contains a more generalized rule definition. With it you can block or open ports, alter how traffic is forwarded between LAN and WAN and many other things. 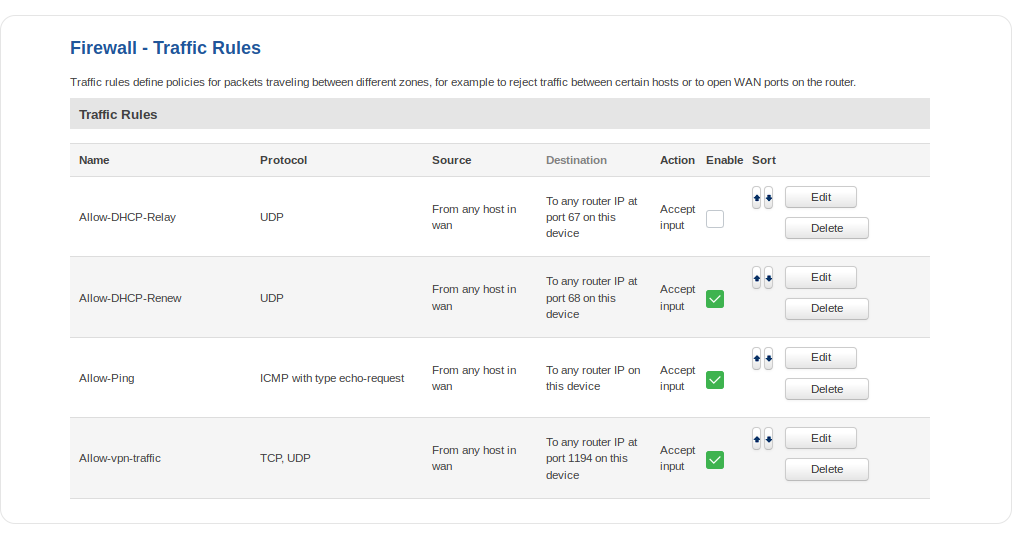 To customize a Traffic Rule, click the Edit button located next to it. This way you can fine tune a rule to near perfection, if you should desire that. The figure below is an example of the "Allow-DHCP-Relay" default rule editing. All rules are configured in an identical manner but with different settings. 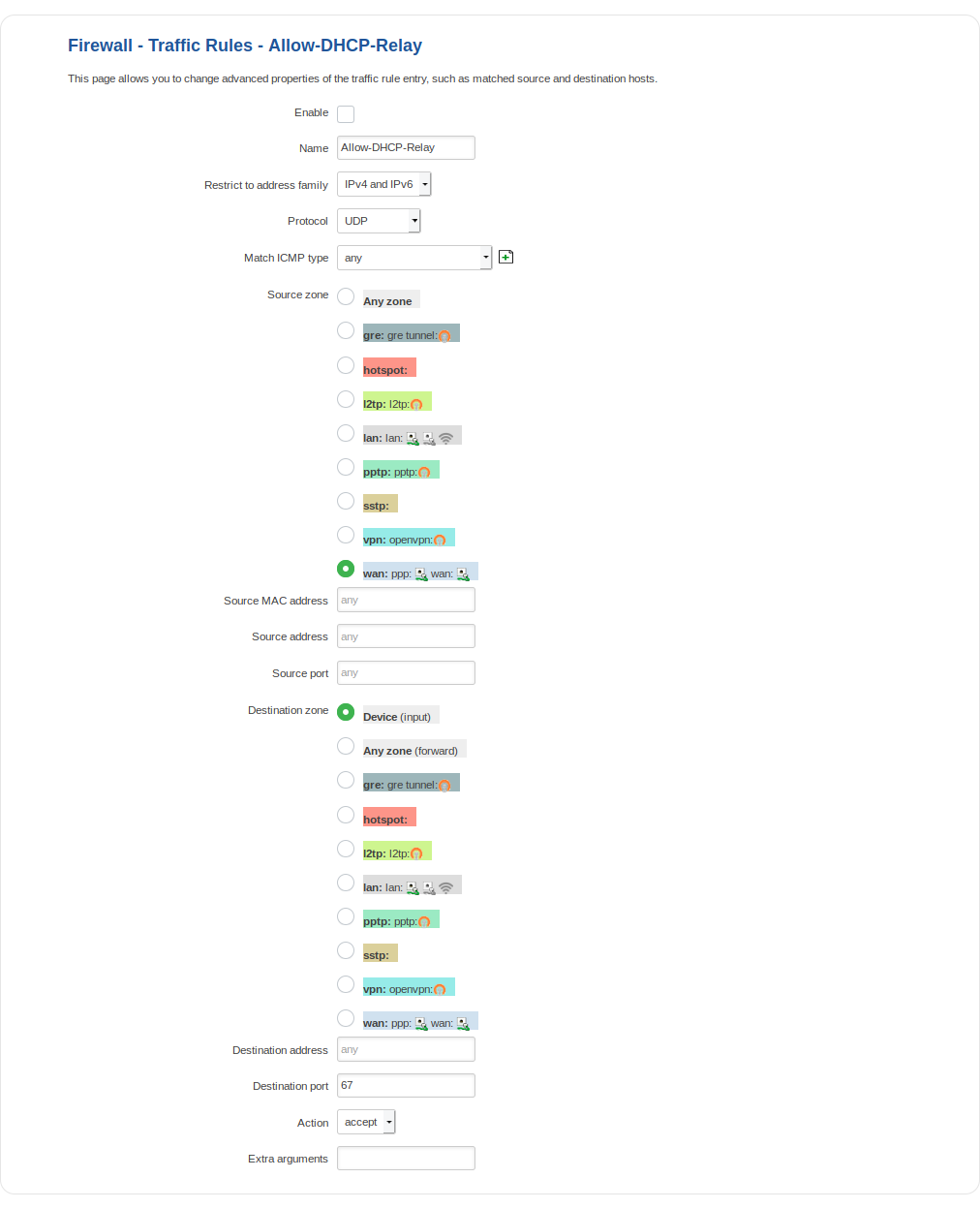 Open Ports On Router rules can open certain ports and redirect hosts connecting to the router from specified zones to specified ports.

Source NAT is a specific form of masquerading which allows fine grained control over the source IP used for outgoing traffic, for example to map multiple WAN addresses to internal subnets.

The Custom Rules page provides ultimate freedom in defining your own rules – you can enter them straight into the iptables program. Just type a rule into the text field ant it will get executed as a Linux shell script. If you are unsure of how to use iptables, we advise that you consult with an expert or check the Internet for manuals, examples and explanations.

The DDOS Prevention page allows you to set up protections from various types of DDOS attacks. You will find information on all of these methods bellow.

Prevent SSH (allows a user to run commands on a machine's command prompt without them being physically present near the machine) attacks by limiting connections in a defined period.

This section allows you to enable protection against HTTPS attacks, also known as man-in-the-middle attacks (MITM).

Port scan attacks scan which of the targeted host's ports are open. Network ports are the entry points to a machine that is connected to the Internet. A service that listens on a port is able to receive data from a client application, process it and send a response back. Malicious clients can sometimes exploit vulnerabilities in the server code so they gain access to sensitive data or execute malicious code on the machine remotely.

Port scanning is usually done in the initial phase of a penetration test in order to discover all network entry points into the target system. The Port Scan section provides you with the possibility to enable protection against port scanning software.

The Defending Type section provides the possibility for the user to enable protections from certain types of online attacks. These include SYN-FIN, SYN-RST, X-Mas, FIN scan and NULLflags attacks.

The NAT Helpers section provides you the option to add firewall exceptions for some VoIP protocols, namely SIP and H.323. In other words, these functions provide a pass-through for VoIP communications between the router's LAN and WAN.

FTP, SIP and H.323 protocols are harder to filter by firewalls since they violate layering by introducing OSI layer 3/4 parameters in the OSI layer 7. NAT helpers are modules that are able to assist the firewall in tracking these protocols. These helpers create the so-called expectations that can be used to open necessary ports for RELATED connections. For example: FTP, GRE and PPTP helpers are enabled by default.