The information in this page is updated in accordance with firmware version TRB1_R_00.07.03.2.

TRB141 devices use a standard Linux iptables package as its firewall, which uses routing chains and policies to facilitate control over inbound and outbound traffic.

This chapter of the user manual provides an overview of the Firewall page for TRB141 devices.

* When a packet goes through a firewall chain it is matched against all the rules of that specific chain. If no rule matches said packet, an according Action (Drop, Reject or Accept) is performed:

The Routing/NAT Offloading is used to turns software flow offloading on or off.

The device checks whether the flow (sequence of related packets) is of a received a packed is known. Packets of unknown flow are forwarded to the networking stack. Meanwhile, if the flow is known, NAT is applied (if matched) and the packet is forwarded to the correct destination port. This process is called software flow offloading.

The Zones section is used to manage default traffic forwarding policies between different device zones. The figure below is an example of the Zones section and the table below provides information on the fields contained in that section:

You can change a zone's settings from this page by interacting with entries in the zones table. For a more in-depth configuration click the button that looks like a pencil

next to a zone:

The Inter-zone forwarding options control the forwarding policies between the currently edited zone and other zones.

Port forwarding is a way of redirecting an incoming connection to another IP address, port or the combination of both: 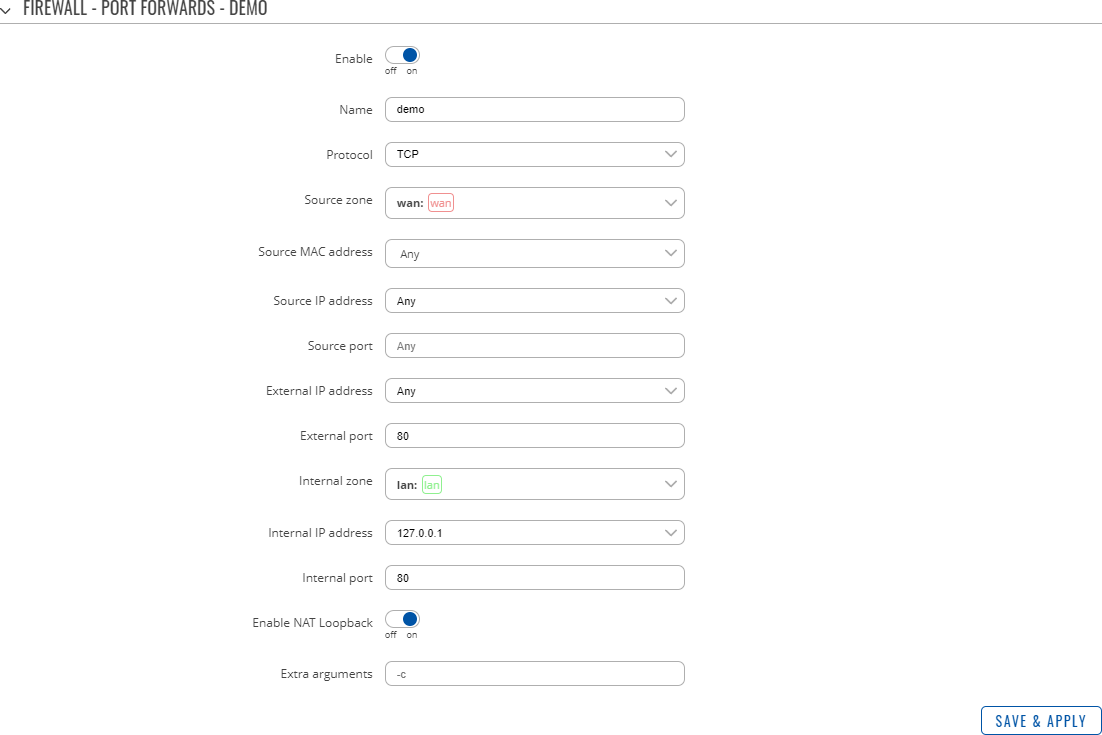 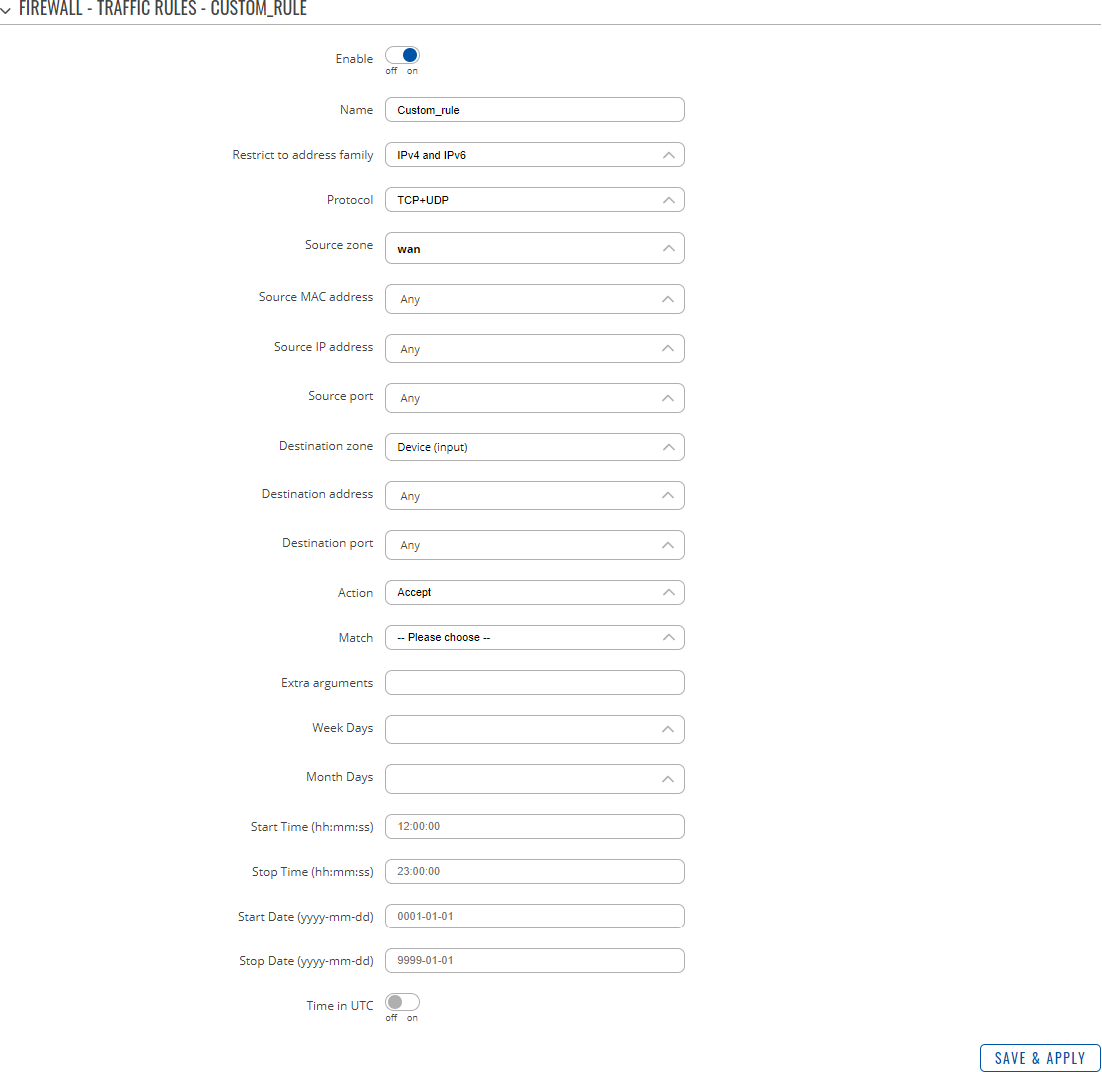 In the Add new instance section, select Open ports on router. This provides a quick way to set simple rules that allow traffic on specified ports of the device. The figure below is an example of the Open ports on device section and the table below provides information on the fields contained in that section:

In the Add new instance section, select Add new forward rule. This is used to create firewall rules that control traffic on the FORWARD chain. The figure below is an example of the Add New Forward Rule section and the table below provides information on the fields contained in that section:

Network address translation (NAT) is method of modifying the source/destination address and/or port information in a packet's IP header.

Source NAT (SNAT) is a form of masquerading used to change a packet's source address and/or port number to a static, user-defined value. SNAT is performed in the POSTROUTING chain, just before a packet leaves the device. 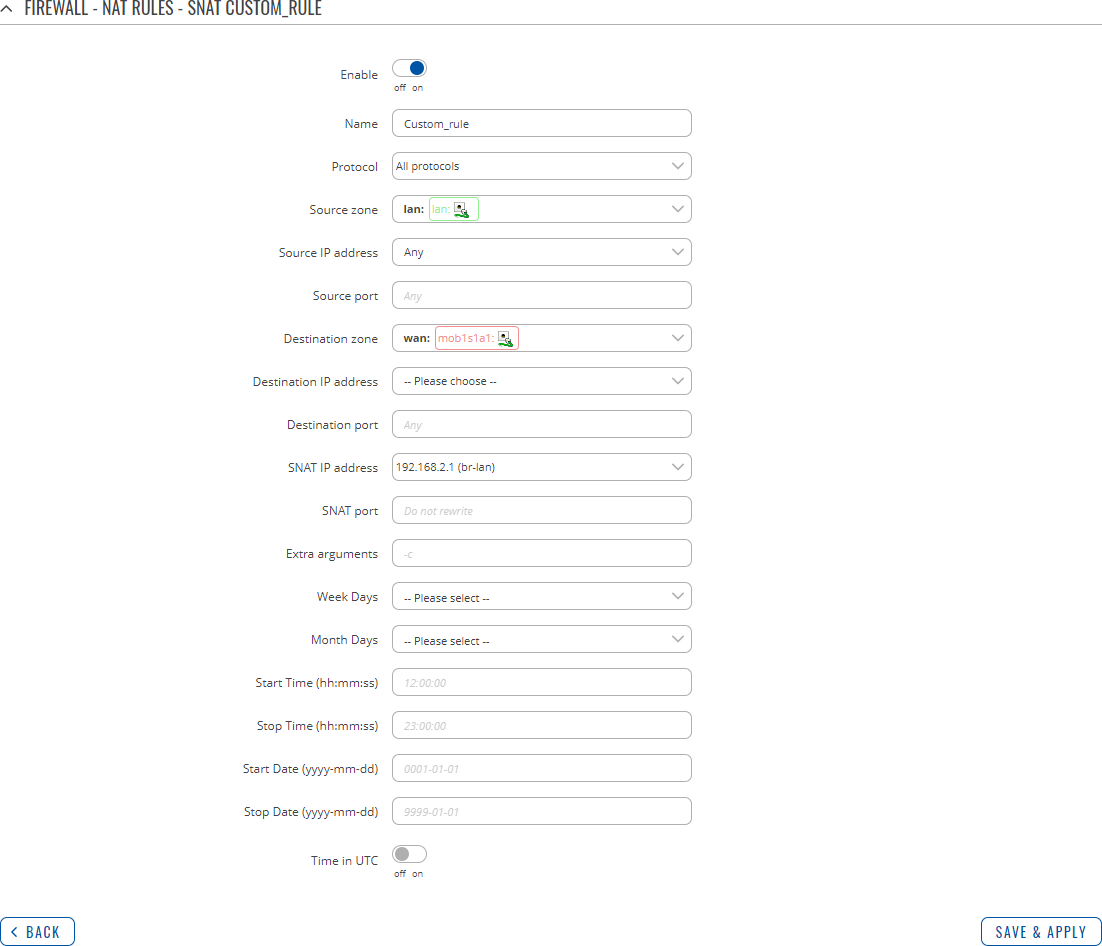 This protection prevent SSH attacks by limiting connections in a defined period.

This section allows you to enable protection against HTTPS attacks, also known as "man-in-the-middle" attacks (MITM).

Port Scan attacks scan which of the targeted host's ports are open. Network ports are the entry points to a machine that is connected to the Internet. A service that listens on a port is able to receive data from a client application, process it and send a response back. Malicious clients can sometimes exploit vulnerabilities in the server code so they gain access to sensitive data or execute malicious code on the machine remotely. Port scanning is usually done in the initial phase of a penetration test in order to discover all network entry points into the target system. The Port Scan section provides you with the possibility to enable protection against port scanning software. The Defending Type section provides the possibility for the user to enable protections from certain types of online attacks. These include SYN-FIN, SYN-RST, X-Mas, FIN scan and NULLflags attacks.

The Custom rules tab provides you with the possibility to execute iptables commands which are not otherwise covered by the device's firewall framework. The commands are executed after each firewall restart, right after the default rule set has been loaded.

Note: Custom rules are not recommended to be used with hostnames. The rules will not remain active after reboot due to security reasons.

The figure below is an example of the Custom rules tab:

The rules added here are saved in the /etc/firewall.user file. Feel free to edit that file instead for the same effect in case you don't have access to the device's WebUI.

The Save button restarts the firewall service. Thus, adding the custom rules specified in this section to the device's list of firewall rules.

The Reset button resets the custom rules field to its default state.

The DMZ is a security concept. It comprises the separation of the LAN-side network into at least two networks: the user LAN and the DMZ. Generally the DMZ is imprisoned: only access to certain ports from the Internet are allowed into the DMZ, while the DMZ is not allowed to establish new connections to the WAN-side or LAN-side networks. That way, if a server inside of the DMZ is hacked the potential damage that can be done remains restricted! The whole point of the DMZ is to cleanly create a unique firewall rule set that dramatically restricts access in to, and out of the, DMZ.

The Settings section is used to set up the DMZ configuration. Refer to the table below for information on each configuration field.