The Virtual Router Redundancy Protocol (VRRP) is a computer networking protocol used for automatic default gateway selection for clients on a LAN network in case the main router (Master) becomes unavailable. Another VRRP router (Backup) then assumes the role of Master; thus backing up the connection.

This page contains a guide on how to configure VRRP on RUT900 routers. To see the manual page for VRRP, click here.

Explanation The routers and the PC are connected to the same network (192.168.1.0/24 via a switch. The purpose of the system is to provide an Internet connection for the PC via the the MASTER router in case the MASTER fails. 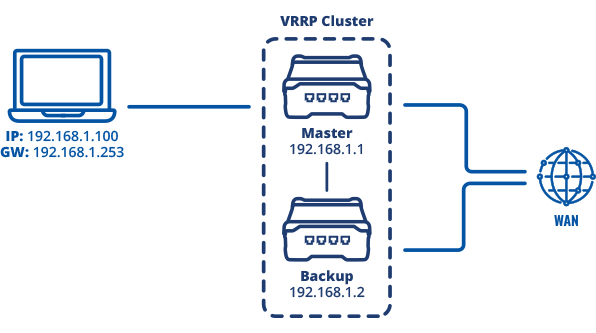 This section provides the configuration parameters used for the MASTER and BACKUP routers. The table below is contains a summary of the settings used. .

The figure below is a screenshot of the VRRP configuration page for the MASTER router:

You can also configure the router to check if there is connection to a certain host, if the connection is lost a lower priority router will then be used as the gateway.

An example configuration for connection checking can be seen here: 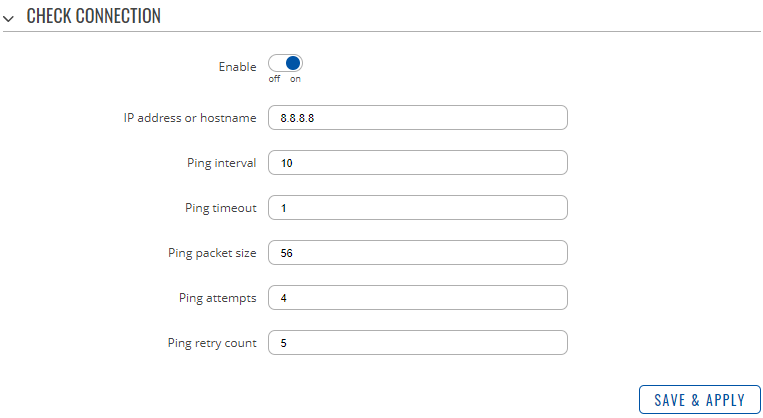 For detailed information on the purpose of each configuration field, refer the VRRP manual page.

Now you will need to set up a static IP address configuration on your PC. For this example we will be using the following parameters:

If you are unsure of how to set up a static IP, please refer to one of our guides:

To test whether the configuration works, terminate the MASTER router's Internet connection (e.g., unplug the cable, remove the SIM card). If everything is okay, the PC should regain its connection to the Internet shortly after that.

Restore the Internet connection to the MASTER router.